How we got here

Let’s step back and talk about design systems. What is a design system? Webster’s dictionary defines a design system as “I have work I need to get done and I don’t want to have to think about what color I should make this button.” Design systems are just a bunch of decisions (keyword, this will be on the test) that have already been made for you. Yeah, and they enforce consistency, promote brand awareness, empower users, save you millions of dollars, yadda yadda. So how do you make one? 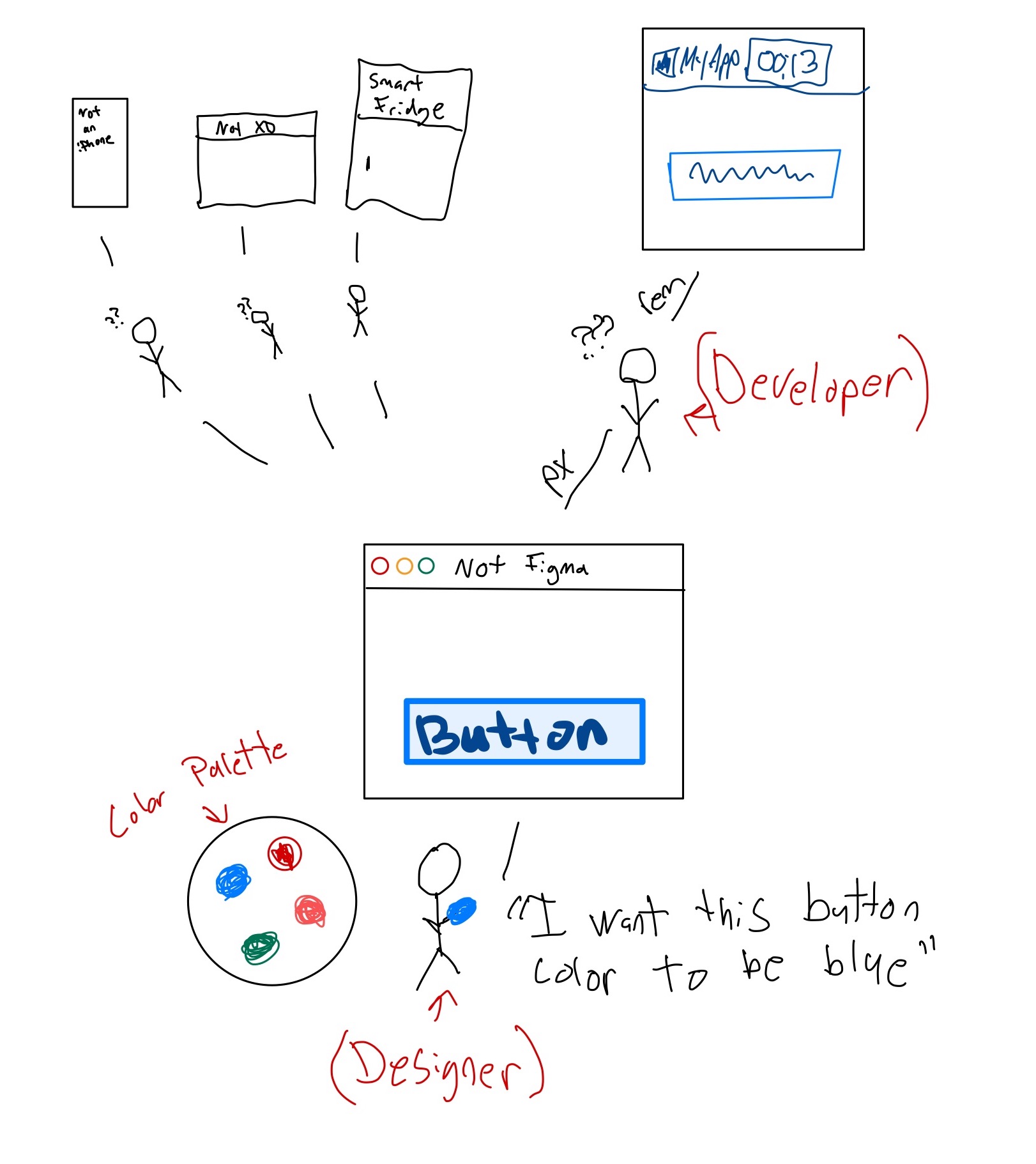 Somebody wakes up one morning and says “we need a common design for buttons”. This feature then starts with a design team. The design team mocks something up in their design tool. They iterate. They turn in their deliverable. Somebody signs off on it. Now the design file is handed off to a development team, who will translate it into some code that somebody will use in an application. Sound familiar?

This baton-passing is how we’ve been doing it for years. It’s great. It makes sense, except design systems are never finished. They are living, breathing things. So in six months when we change our button color, now the development team needs to update their button code. And what happens if we change our primary color, which is what the button was using? Maybe we add a new state or a new variant. More batons, more chances for them to be dropped.

Adobe refers to their design tokens as “DNA”. I think that is a perfect name and a perfect analogy. Every time DNA replicates, there is a chance for a mutation to occur, an error in the copying process. Every time you change a design decision, you have the same risk for mutation when that decision gets copied downstream to other consumers. We want to reduce the number of times our design decisions are replicated.

Reframe your source of truth

In our example, in order to access the design system, a user must now:

Next, they need to:

All of these things are barriers to entry for people who just want to know what color to make their button. Yes, you can and should be documenting your design system, but the documentation will always be a step behind your design file. What if there was a better way? 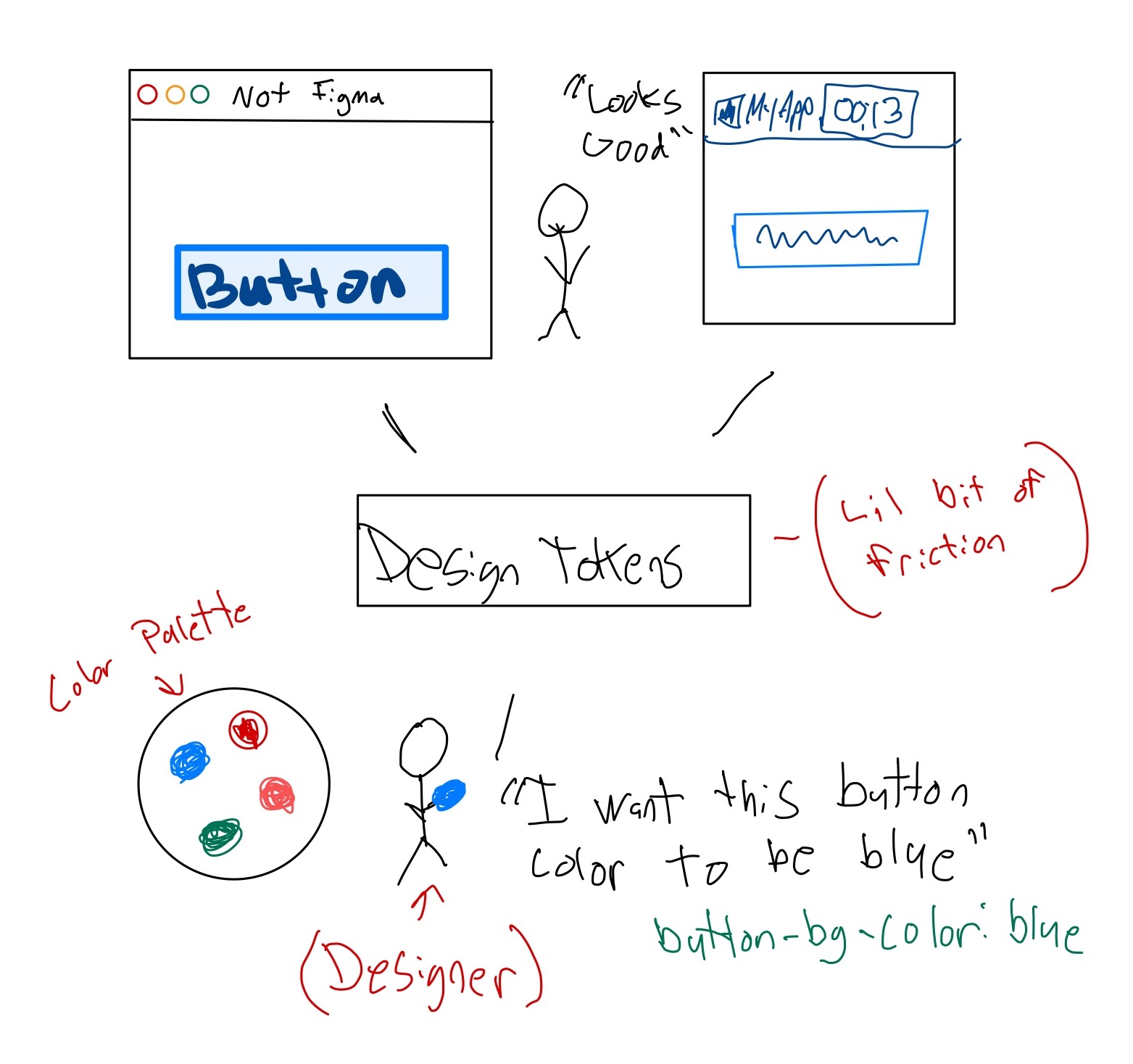 When a designer is working in a design file, they’re implicitly making dozens of design decisions. “The background color of this button is #f3f3f3. The padding is 20px. It should have a 3px border radius”.

Imagine if they kept a notepad on their desk and every time they made a new design decision, they recorded it in their notepad in plain English. Now they can hand that notepad to all consumers of their design system and completely eliminate the decoding step because there is a shared language.

Now, recording design decisions in a notepad on your desk probably isn’t the best method though. You might use a third party service, a google doc, a separate Figma page, or some JSON on GitHub. We use the Figma Tokens plugin and found it to be the least amount of friction for designers because it allows them to work within the tool they are most comfortable with. The most important piece of this is that your design tokens become the primary method for how you talk about and interact with your design system, both internally and externally.

It’s all about a shared language 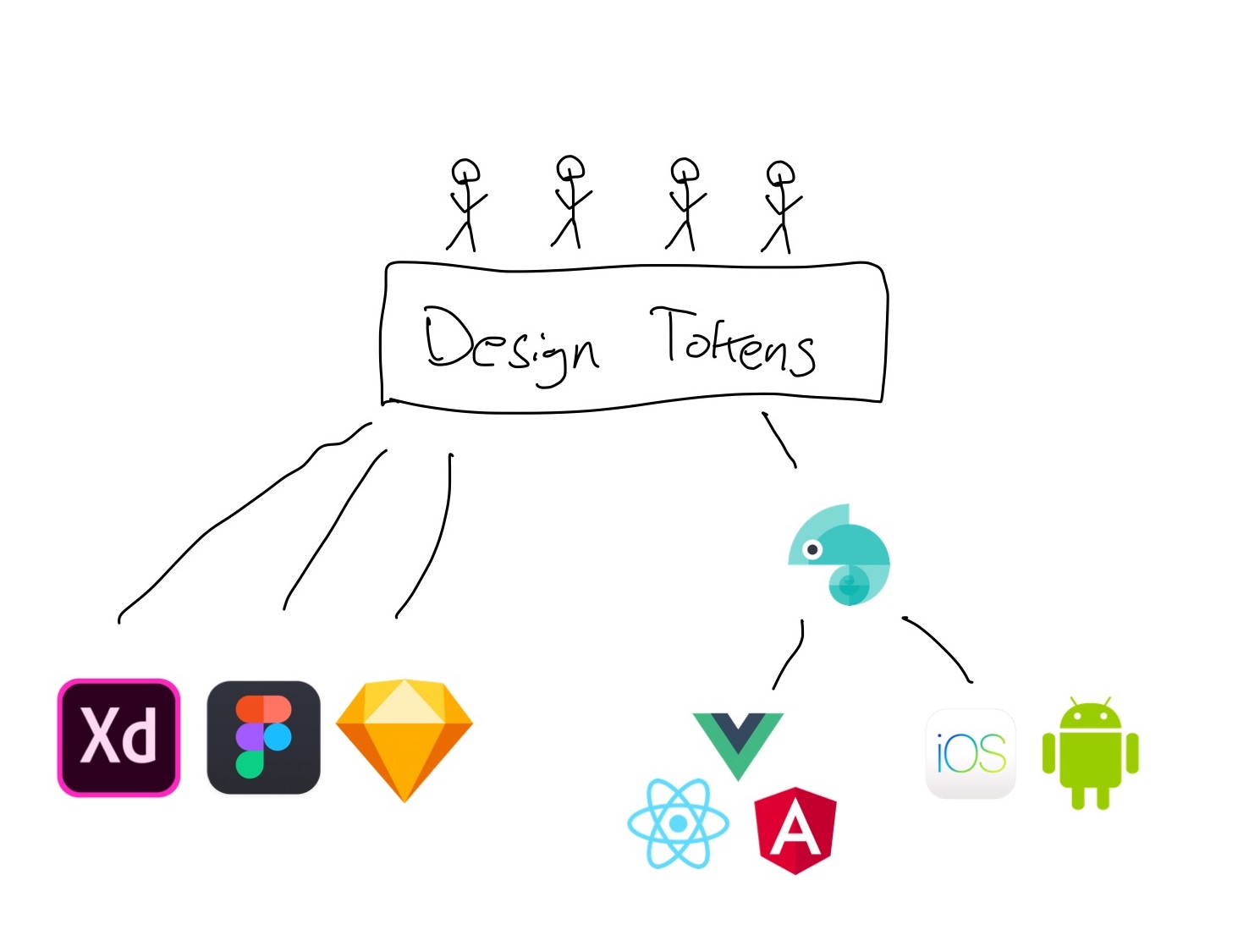 A funny thing happens when you start thinking in design tokens. When you shift your source of truth to something that is more universal, now you’ve opened up the lines of communication. Developers can have a more active role in the design system. Outside contributors can propose new changes. Everybody shares a common language.

[Doug ordering from the Honker Burger for the first time]
Doug: Hi, I’d like three double cheeseburgers, one all the way, one no pickles, one no onions, a fish sandwich, four large fries and four grape sodas.
Honker Burger Lady: What on Earth are you trying to say?
Doug: What do you mean?
Honker Burger Lady: I can’t understand you.
Doug: Listen, my family is starving…
Skeeter: Yo, man, let me take care of this. The new kid wants three moo cows, one no cukes, one no stinkers, one wet one, four cubers, and four from the vine. Want anything else?
Doug: Well, how do you order a salad from the salad bar?
Skeeter: One salad from the salad bar.” — Mosquito ‘Skeeter’ Valentine, Doug, S01E01

Design Tokens are our Mosquito Valentine. They allow users of multiple platforms and backgrounds (Doug, who doesn’t know anything about Figma) to communicate with our design system (the Honker Burger).

And sometimes, you really can’t come up with a better name than one-salad-from-the-salad-bar.

The Cost of Design Tokens

Design tokens have a real cost though. You’re offloading the encoding/decoding work that is required from end users of your design system onto the designers themselves. There is no getting around that, but the work is significantly less and the rewards are immense. In the end, you get a design system that is 1. Future proof 2. Accessible 3. Able to be easily changed.

Design tools change. We had Photoshop, then Sketch, then Figma. Platforms change. We had desktop computers, mobile devices, iOS and Android, watches, tablets, TVs, refrigerators. Everything changes, but a button will always be a button.